Cookie preferences
This website uses cookies, which are necessary for the technical operation of the website and are always set. Other cookies, which increase the comfort when using this website, are used for direct advertising or to facilitate interaction with other websites and social networks, are only set with your consent.
Configuration
Technically required
These cookies are necessary for the basic functions of the shop.
"Allow all cookies" cookie
"Decline all cookies" cookie
CSRF token
Cookie preferences
Currency change
Customer recognition
Customer-specific caching
Individual prices
Language detector
PayPal payments
Selected shop
Session
Comfort functions
These cookies are used to make the shopping experience even more appealing, for example for the recognition of the visitor.
Note
WhatsApp Chat (collapsed/open)
Statistics & Tracking
Affiliate program
Facebook Pixel
Track device being used
Categories

This product is currently not available.
Please inform me as soon as the product is available again.

Currently not in stock.

The coffee is very fruity, complex and with a pronounced acidity, caramel-like sweetness and a silky body. Intense aromas of candied orange, red berries and plum. 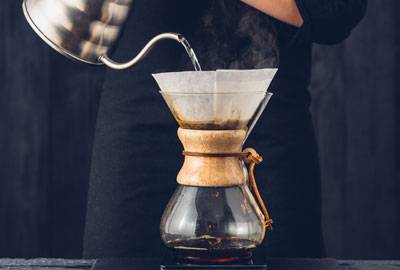 Gutemala Anaerobic Red Honey should be drunk single origin or can be added to a blend to add a fruity, complex note.

Perfect as brewed - filter coffee, cold brew or in the Aeropress. Or alternatively as a cappuccino - the milk brings out the fruity notes and reduces the acidity.

Finca la Senda is an innovative farm in Guatemala run by Arnoldo Pérez Melendez and Maria Eugenia Escobar. The beginnings of Finca la Senda date back to the 1940s, when Arnoldo's father pioneered coffee cultivation in the area surrounding Aldea el Socorro in Acatenango.

The finca stretches from the borders of the village to Mount Balàm, the "hill of the jaguar" in the local language. The coffee is planted at an altitude of between 1,550 and 1,970 metres, while nature takes its own course further up the mountainside, preserving the unique biosphere. The coffee is harvested on an area of about 27 hectares.

Arnoldo has spent his whole life with coffee, a beloved product that feeds not only his family but also many families in Aldea el Socorro, as all his employees (14 all year round, about 70 during harvest) are villagers.

In recent decades, Arnoldo and Maria focused on cultivation, with the coffee being supplied to the local cooperative. This ageing model took an unexpected turn in 2017 when a speciality coffee trader and coffee consultant visited the village. A blind tasting of many of the region's coffees revealed the potential of the finca's cherries. The ensuing discussion gave Arnoldo and Maria the impetus to build their own "beneficio" in 2017 to directly influence the processing of the coffees.

The varieties grown on the finca are Caturra (about 65%), Bourbon (about 25%) and Typica (about 10%), all harvested between the end of November and March. Only Caturra beans were used for this coffee. The volcanic soil provides good nutrients and the climate in the region is ideal for growing coffee. This results in high-quality coffees, which also regularly convince at the Cup of Excellence.

After harvesting, the cherries are cleaned and sorted by hand to ensure that only cherries with the right degree of ripeness are processed. The cherries are then fermented anaerobically for about 40 hours, after which the pulp is removed and the coffee is dried on African beds in the shade for 6 to 8 weeks. This very complex processing method leads to the very exceptional flavour profile, which is reminiscent of candied oranges and red berries. 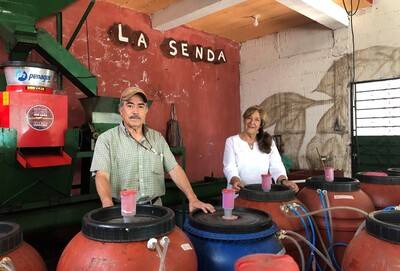 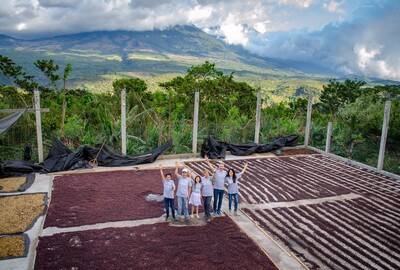 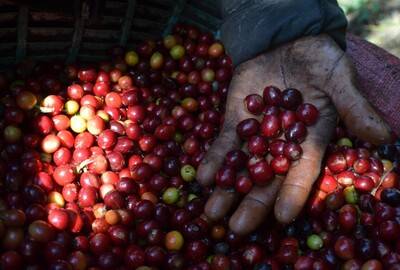 We recommend a light or medium roast, which fully brings out the fruity notes and complexity of the coffee.

You can find roasting profiles for this bean in the knowledge section: for Gene Café, for Hottop Manual, for Hottop with Artisan and for Aillio Bullet R1 V2.

The green coffee is delivered in a transparent and resealable 1kg or 5kg Ecotact fresh bag or in a 15kg bag-in-box..

This website uses cookies, which are necessary for the technical operation of the website and are always set. Other cookies, which increase the usability of this website, serve for direct advertising or simplify interaction with other websites and social networks, will only be used with your consent. More information
Decline Accept all Configure